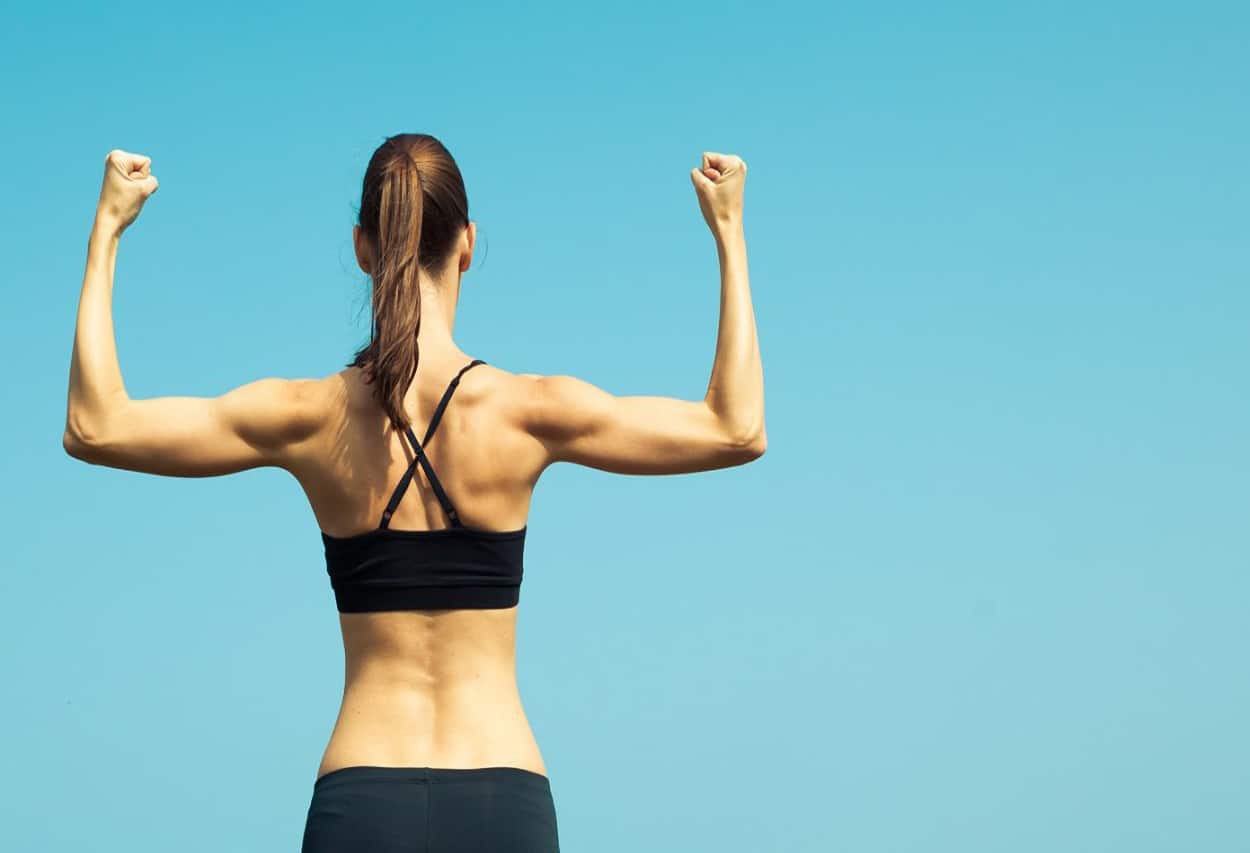 How to Get Rid of Arm Flab

Here’s a quick question: Whose arms do you covet? Rihanna’s or Madonna’s? Gisele Bündchen’s or Michelle Obama’s? Whether your aesthetic is model thin or athletic, there’s no arguing that arms are the ultimate barometer of buffness. They immediately let people know “I’m fit!” or “I haven’t lifted more than a tub of ice cream in months.” And unlike your abs and thighs, which make peekaboo appearances only in hot weather, your arms have to be ready for their close-up pretty much year-round.

The tricky part is that there’s no consensus on what level of perfection we should be reaching for. According to data from a national survey, the average woman over age 18 has an upper-arm circumference (typically measured around the biggest part of the biceps) of just less than 12 1/4 inches. But that girth doesn’t take into account firmness versus flab. And the truth is, studies of upper-body strength showed that women tend to neglect doing the toning that would add muscle to that mix.

If you’re like me, you probably have a short list of go-to exercises you’ve used since college to sculpt your arms and shoulders. A few curls, some kick backs, maybe some overhead presses. I’ve gotten by — even received compliments — with this repertoire, but I’ve recently discovered that arms are not so easily tamed. The upper arms and the shoulders have no fewer than nine primary muscles that require some serious firming if you want to make the sort of sleeveless impact you see on the red carpet.

Even if you’re the type who would rather sit through a Jersey Shore marathon than grab a dumbbell, the science and sets here will make you drop the remote. These proven strategies and exercises make strong, sexy arms finally attainable. So attainable, in fact, that our plan took up to an inch and a quarter off our testers’ arm measurements while building muscle-carving strength that you can see, all without dieting. If you’re tired of envying other women’s arms while covering your own, get ready to roll up your sleeves.

The Science Behind Arm Fat

The primary complaint women have about their upper arms: flab. Turns out, this area is part of the major fat-pocket trifecta in females. “Women tend to store fat around their hips, thighs, and upper arms,” explains William Kraemer, PhD, a professor of kinesiology at the University of Connecticut and a expert in resistance training. Combine that with the fact that women may be undertraining their arms and you’ve got the makings of a true trouble spot.

The good news is that the areas where your body likes to deposit fat are also the ones that give up the fat sooner, Kraemer says, which means you’ll see results faster. By now you know that shrinking fat requires a combination of burning more calories and eating fewer of them, especially in the form of sugar. “Consuming too much sugar inhibits your fat-burning enzymes, which slows down fat loss,” Kraemer says. “You can’t ignore what you’re eating if you’re trying to improve your body composition.”

Then there’s the back-of-the arm muscle lying beneath that fat you’re trying to fry. Place your left hand on the back of your right upper arm. The muscle you’re feeling is the triceps. It’s a single muscle, but the tri-part of its name refers to the fact that there are three sections, or heads — the lateral, the long, and the medial — that originate at your shoulder blade and upper arm and end just below your elbow. They all fire together to help straighten your arm and create force anytime you’re pushing against something, like a door or the floor.

Now, thanks to research from the American Council on Exercise (ACE), we know exactly how to tackle toning this area. “To be honest, we did the study in part because of all the attention the First Lady was getting about her arms,” says Cedric Bryant, PhD, ACE’s chief science officer. In the study commissioned by ACE, researchers at the University of Wisconsin-La Crosse rigged exercisers’ upper arms with EMG electrodes and tested eight different moves, comparing muscle activation in the triceps. The higher the activation, the harder the muscle was working. Triangle push-ups took the top spot, followed by those good old kick backs and bench dips. (You’ll do all three exercises in the Hot Arms Made Simple workout.)

To judge the jiggliness of your triceps, forget the bye-bye wave. “Wiggling is normal, since a relaxed muscle is soft by nature,” says William A. Sands, PhD, the director of education for the National Strength & Conditioning Association. But if you’re in a plank position and you don’t notice even a hint of a curve in the back of your arms or you can’t press yourself up, you’ve got some reps (or cardio!) to do.

Can You Pinch an Inch?

To ballpark your arm flab at home, try this: Get in full push-up position, then reach over with your left hand and grasp the back of your right upper arm midway between the top of the shoulder and elbow. If you can grab more than an inch of flesh, it’s time to start melting the fat.

Biceps: Its full name is biceps brachii; just beneath it lie the brachioradialis and the brachialis.

Triceps: The lateral head, or section, of this three-part, back-of-the-arm muscle is the most visible.

Shoulder: This teardrop-shaped muscle is made up of the anterior (front), posterior (back), and medial (side) deltoids.

Many women seem to have a love-hate relationship with the biceps: The muscle makes up only a third of the upper arm’s size — the triceps accounts for the other two-thirds — but is often blamed for making arms appear bulky. “The muscle fibers in the biceps are long, and they run along the length of the upper arm. This structure improves the muscle’s ability to contract or shorten, so you may get the rounded appearance,” explains Peter Ronai, a clinical associate professor of exercise science at Sacred Heart University. But you would have to dedicate hours at the gym with progressively harder training to achieve that “tennis ball” look. Even the fact that the biceps is constantly working every time we carry a gym bag or tote a toddler won’t make this muscle bulge.

“In all the cases I’ve seen where women train their arms with heavy resistance, they see a reduction in fat and an increase in lean muscle tissue, which results in a smaller arm, but one with more definition,” says Kraemer, who has been involved in dozens of studies evaluating the best ways to resistance train. “They were losing fat and seeing the muscle for the first time. Their arms were actually smaller in circumference.”

That said, a girl still wants some sexy cuts, and sculpting the biceps is a little trickier than the triceps because there are a few other muscles involved. The bi- in biceps refers to the two sections, or brachii, of the muscle. It runs in the same pack as its two kissing cousins, the brachialis and brachioradialis, so that nice, carved curve you see when doing your curls is really three muscles, even though the biceps always gets top billing. They all primarily work to bend the elbow, and different grips on your dumbbells — palms up, palms facing each other, palms down — recruit the muscles in different ways (as in the 10-10-10s move in the Hot Arms Workout). “For well-rounded toning, use all three grips in your routine,” Sands advises. And unless you can afford to pay someone to carry your groceries, kids, and luggage, you need to show this muscle some love pronto.

Imagine as you read this that there is a mirror next to you. If you were to take a peek at your posture right now, would you be more of a C shape than a straight line? Are your shoulders rounded, maybe? Your head jutting forward? (I have mirrored closet doors behind the desk where I write, and when I swivel my chair around without straightening up…Let’s just say it’s not a pretty picture.) You may be surprised to hear that this unflattering hunched-over position actually has a name: upper crossed syndrome, a mix of too-tight chest muscles and overstretched and weak back muscles.

Use this simple do-it-yourself test, from Kevin Messey, the head athletic trainer at the University of California, San Diego, to see if your posture could use some uncrossing: Stand with your heels, butt, back, and head against a wall. Can you get the back of your shoulders to touch the wall? If not, that means they’re rolling forward. Now stay there and bring your arms out into a T shape and then into a goalpost position against the wall (your elbows are bent 90 degrees and forearms are raised and perpendicular to the floor). If your back arches to help you get into these positions, that’s another sign that your shoulders are rounding.

The reason many of us fall into this slump is that we’re overly concerned with mirror muscles, says trainer Todd Durkin, the owner of Fitness Quest 10 gym in San Diego.

“Most people tend to work the chest because it looks good, but they forget about the muscles they can’t see, like the rear deltoid in the shoulder,” he says. Of the coconut-esque padding we call the shoulder muscle, it’s the front and side sections — the anterior deltoid and medial deltoid, respectively — that often get all the toning to the exclusion of the rear. Start working the rear deltoid, Durkin says; this will also help pull your shoulders back, which makes you look taller and slimmer. “Do two rear delt moves for every front or middle delt one,” he says.

This two-for-one formula also stabilizes your shoulder joint, which is notoriously injury-prone. “The shoulder joint is like a golf ball sitting on a tee,” Messey explains. “It’s easy for the ball to fall off.” It’s the job of the deltoids and the SITS (supraspinatus, infraspinatus, teres minor, and subscapularis) muscles, also known as the rotator cuff, to help the ball stay put. The deltoids mainly move your arm forward, back, and out to the sides and help rotate it in and out. The SITS muscles surround the top of the golf ball, or the humerus, to keep it stable in the joint. “The rotator cuff is like an intricate steering system on a powerful, high-performance racing car,” Ronai explains. To have truly strong shoulders, you need to target all of these muscles. Luckily, this workout has got your back, er, shoulder.

While it’s true that I’ve spent hours a day in front of a computer for most of the last 18 years, I also know my way around a weight room. I’ve been strength-training for as long as I’ve been typing, and one muscle I dutifully work is the rear deltoid, but usually only once a week. I knew that FITNESS had recruited testers who were relative newbies to arm workouts, and I thought I’d join the experiment to see how this plan would work for someone like me who’s been regularly doing her reps without the oomph to show for it.

One month later, here’s what I’ve learned: If you really want to target a muscle to make it look firmer and more defined, you have to work it frequently and consistently. One day a week will not get you crazy-tight triceps or the seriously sculpted rear delts that make your shoulders look killer in a strapless.

7 Exercises to Tone Your Lower Abs